Hacktober started again! Hacktober is an event hosted by Github and DigitalOcean to promote contributing to open source. And for this year, I decided on a theme; improving accessibility. And to keep track of what I learned, I’ll be maintaining a log here.

I want to do my part in making apps and technology more accessible to everyone. So I want to get more practice in finding accessibility issues and fixing those.

I’m also a frequent attendee of the CocoaHeadsNL meetup. They have an open source app, which lists all the events and notifies you when a new one is posted. So it’s a good way to quickly RSVP for a meetup. However, accessibility was not a main concern when developing this. So after a quick audit, I came upon the following two issues that could be fixed quickly; 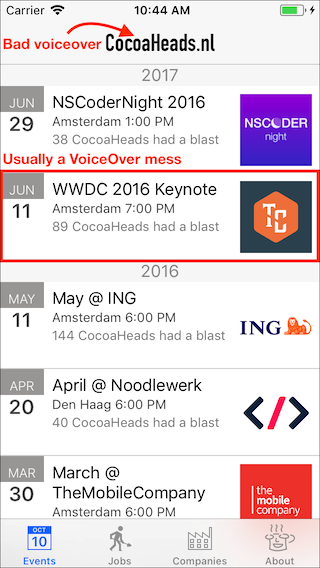 If you enable VoiceOver, the title of the Events screen sounded as follows;

This doesn’t make things clear at all. So my first attempt at fixing this, looked like this;

However, that didn’t actually change the VoiceOver message? So what happened?

Instead of using the imageView’s accessibilityLabel, VoiceOver uses the view controller’s navigationItem.title to determine what it reads. And that was set in Storyboard! Mystery solved. So my new code looks like this.

Okay, now what does VoiceOver say?

Upcoming and past events. Header. Image.

That’s good. However, the “Image” trait doesn’t work well. Someone with VoiceOver doesn’t really care that it’s an image. So we remove that UIAccessibilityTrait. However, removing this somehow also removed the “Heading” trait (no idea why), which actually is useful. So we add that again. Our final piece of code looks like this;

Done! Our first improvement is on the way.

When I audited the event table view cells, I was actually very pleasantly surprised.

Well, that is nearly perfect, particularly the pronounciation of the month was unexpected. So why is it perfect? The main reason is that a UITableViewCell plays very well with VoiceOver. As you can see, the order in which it speaks coincides with the order the view’s are arranged in the cell’s contentView. 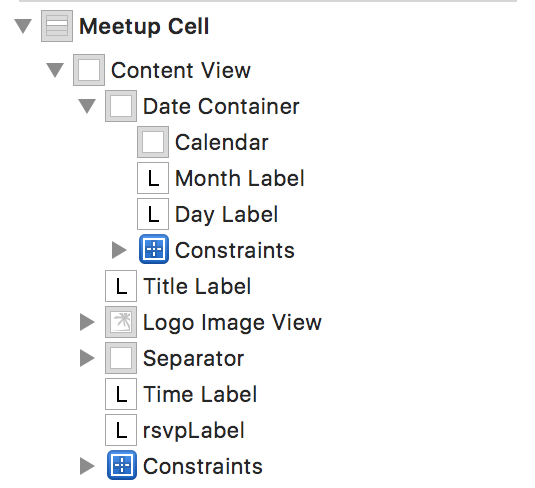 However, something weird showed up. While every month seemed fine in VoiceOver (even “Jan” was pronounced as “January”), only the month March didn’t participate. “Mar. 30.”. No idea why that happens. But instead of contemplating it too long, I decided to force the issue;

Both improvements went into this pull request which has been merged already! 🎉